The United States and the Gulf Arab states maintain a long-standing partnership that is crucial to their national interests. Yet suspicion, common misunderstanding, and mistrust of the other are widespread on both sides – among elites as well as in public opinion and popular culture. Repairing frayed trust and restoring mutual confidence is essential, and will require, as a first step, a thorough understanding of how American and Gulf Arab societies view each other.

What are the fundamental impressions that Americans and Arabs from the Gulf states hold about each other? What are the cultural bases and key historical turning points that have shaped these impressions? How can both sides work together, and separately, to address concerns and rebuild confidence? How can we ensure that the public, on both sides, is aware of the key interests and shared goals that have shaped a close working relationship? AGSIW was pleased to present a detailed examination of these issues and more with James J. Zogby, president of the Arab American Institute, based on his years of groundbreaking polling in the United States and the Arab world, and long career of advocacy and analysis. AGSIW Senior Resident Scholar Hussein Ibish moderated the discussion.

The roundtable opened with a seemingly simple question: What are some of the fundamental impressions that Americans have about people living in the Middle East, particularly in the Gulf Arab states? James J. Zogby explained that while some general observations can be made, such as the lack of understanding of diversity in the Arab world, beliefs have been shifting over the last several decades. He stated that these opinions have historically been a function of the Arab-Israeli conflict, in which Arabs have been viewed negatively due to the drawing of parallels between American and Israeli history. However, the events of 9/11 and the wars in Iraq and Afghanistan shifted public opinion to the association of violence and terrorism with Arabs and Muslims. Zogby also noted that the Arab Spring did little to improve public opinion, as many viewed its shortcomings as evidence of a “backward culture.”

The discussion then turned its focus to how Americans are perceived in the Gulf Arab states. While Zogby acknowledged that both sides share some general negative opinions of each other, he explained that Arabs in the Gulf have a better understanding of the diversity of the United States, stemming from the fact that globalization has been closely tied to the diffusion of American culture, including sports, politics, and social movements. Along with a deeper understanding of U.S. domestic affairs, Zogby reported that many in the Gulf Arab states appreciate American ideals of altruism and freedom. Unfortunately, the same people who hold that appreciation also feel those characteristics are not applied to the United States’ relationship with the Arab world.

After presenting some of the general trends in opinions between Americans and Arabs in the Gulf, Zogby began to unpack the factors that contribute to these sentiments. On the American side, Zogby argued that broad generalizations and stereotypes stem from a lack of education about the region at all levels. With no deeper understanding of the culture or people from the region, most Americans’ understanding is shaped by popular culture and the media. Zogby cited the objectification of Arabs in entertainment media as a prime example of this phenomenon. For Gulf Arabs on the other hand, Zogby argued that negative perceptions about Americans are largely influenced by the uptick in Islamophobia in the United States. He said that while there are certainly significant cases that can attest to this development, he believes that the success of many Arab-Americans is too easily dismissed.

Before opening the discussion to the audience, Zogby offered key insights that could help reverse these misconceptions. He believes that for Americans, there needs to be improvements in education and diligence on the part of the media to give attention to stories that focus on the human aspect of Arabs and Arab-Americans as much as they do on reports of terrorism. For Gulf Arabs, Zogby believes that there must be a greater effort for Gulf Arabs abroad to build personal relationships, rather than focusing solely on agreements made between the U.S. government and Arab leaders. Zogby ultimately argued that the way to reverse those negative opinions is to build bridges of understanding at a personal level. 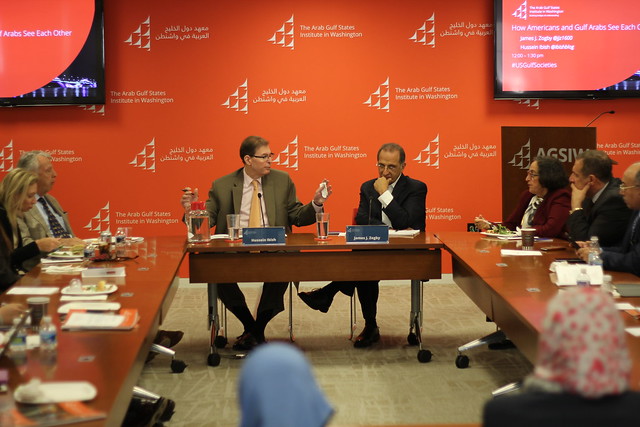