The lure of entrepreneurship is growing in the GCC countries, as the region plans ahead for a future less dependent on oil. The GCC’s tech startup sector has grown tenfold over the past four years, thanks to the development of the region’s venture capital ecosystem. On June 9, the Arab Gulf States Institute in Washington held a panel discussion examining the startup environment in the GCC and what factors enhance or inhibit the success of entrepreneurial ventures in the region.

Nermin Fawzi Sa’d is an electrical engineer and the founder of Smart Detection Bra (SDB), a private and safe option for early breast cancer detection based in Riyadh, Saudi Arabia. She discussed the promising technological ecosystem in the Gulf for entrepreneurs and highlighted the importance of the expansion of startup incubators like 1776 in the Middle East. Sa’d discussed the region’s strength in local talent while recognizing important gaps such as the lack of wider perspectives on entrepreneurship that can be bridged by organizations like 1776.

Sweta Mangal began her discussion on the startup environment in the GCC referencing her experience with the startup MUrgency, an emergency response app that connects users with the nearest nurse, doctor, or paramedic. Mangal said her company chose Dubai because of its very receptive environment for startups. She discussed incentives that Dubai provides that affect the success of entrepreneurial ventures in the GCC. Its tax policies, its rich investment climate, the support of the government, and the perception of representing a global company because they are operating from Dubai led to the decision to establish an office in the region. Mangal reinforced Sa’d’s point that the ecosystem, or supporting infrastructure of investment, venture capital firms, government support, sponsorship, and mentorship, has a significant impact on the success of startups. She claimed this environment lags behind in the Gulf compared to the United States but it is beginning to grow and develop.

Brandon Pollak, director of global affairs at 1776, spoke about his organization’s efforts to nurture a startup environment worldwide by connecting startups with venture capital firms, investors, policymakers, and mentors. He identified Dubai as a budding regional epicenter of entrepreneurship. The work of incubators like 1776 coincides with the efforts of GCC countries to wean off of oil dependence by diversifying their economies. This, Pollak argued, has led to a greater push across the Middle East and North Africa working to foster local startup infrastructures that are crucial to the success of startup economies.

Nermin Fawzi Sa’d is the founder of SDB (Smart Detection Bra), a private and safe option for early breast cancer detection, based in Riyadh, Saudi Arabia.

Brandon Pollak is the director of global affairs at 1776. Part of the founding team of 1776, he leads strategy and outreach to influencers, including policymakers at the federal, state, local, and international levels, embassies, and industry leaders across 1776 verticals.

Raymond E. Karam is the director of program outreach and communication at the Arab Gulf States Institute in Washington. Prior to joining AGSIW, Karam served as the EastWest Institute’s Washington, DC representative. In his capacity, he directed the institute’s outreach to members of Congress, congressional staff, various federal departments, foreign embassies, and international organizations. 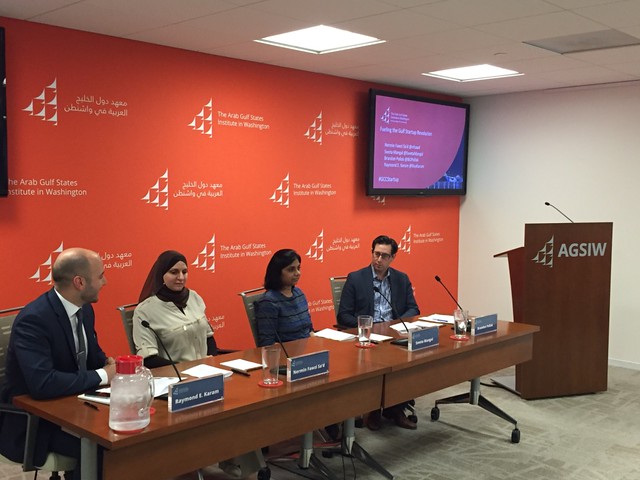