The past five years have witnessed a tremendous growth in the creative fields in the Gulf Arab states. This symposium aimed to celebrate these advances and evaluate their impact: on social change, and on the global perception and representation of the Gulf Arab states. Participants included artists and representatives from arts foundations, who engaged in discussion about the role of the creative fields and shared their work through exhibitions and performances.

The panel on July 12 explored the transformation of arts and culture in the Gulf under the influence of a new media-savvy generation, and state investment in new arts industries. The speakers mapped out the new dynamism in the arts that the region is experiencing.

For more about the contemporary art scene in the United Arab Emirates, as well as the history and background, read  “The UAE’s Emergence as a Hub for Contemporary Art” by Non-Resident Fellow Hanan Sayed Worrell.

Mariet Westermann began by sharing her perspective on Gulf arts and culture. Relating her experience as provost and chief academic officer of New York University Abu Dhabi, Westermann recognized the important role the institution played in being a cultural agent as well as an education center. The university, she explained, is just as much a resource for the community as the community is for it.

Aisha Stoby then presented her experience with the Gulf’s emerging art world. The Omani art historian and curator outlined the artist communities within Oman, focusing on their role as community builders. She showcased various influential Omani artists and the social history of the country’s artistic evolution. As support for the arts continues to increase within Oman and social media is more widely used, Stoby demonstrated how the artistic landscape has also changed in such a short period of time.

Ahmed Angawi shared his experience with art in Saudi Arabia and how he and his family have attempted to use their positions in the art world to foster communication and societal awareness. Reaching out with his own artistic projects, Angawi attempts to showcase the country’s collective voice. He explained the value in art, craft, design, culture, and tech working together to create a dialogue.

Hanan Sayed Worrell, through a systematic approach, explained the emergence of contemporary art in the United Arab Emirates within its three major cities and how the character of each is reflected through a unique world of art. Sarjah’s diverse collection of museums and its reputation as the UAE’s cultural capital are reflected within an art movement that balances tradition and development. Dubai is the country’s commercial and financial hub and, as Worrell explained, its artist community was developed through private initiatives. Abu Dhabi, as the country’s capital, shows a focused commitment from the leadership to arts and culture in an attempt to diversify.

Noor Aldabbagh, through a screening of a short film, emphasized the evolving artistic initiatives within the Gulf states. The film was a behind-the-scenes perspective of a yearly Art Week event exhibition, which promotes arts and creative movements by supporting artists and the region’s creative minds. 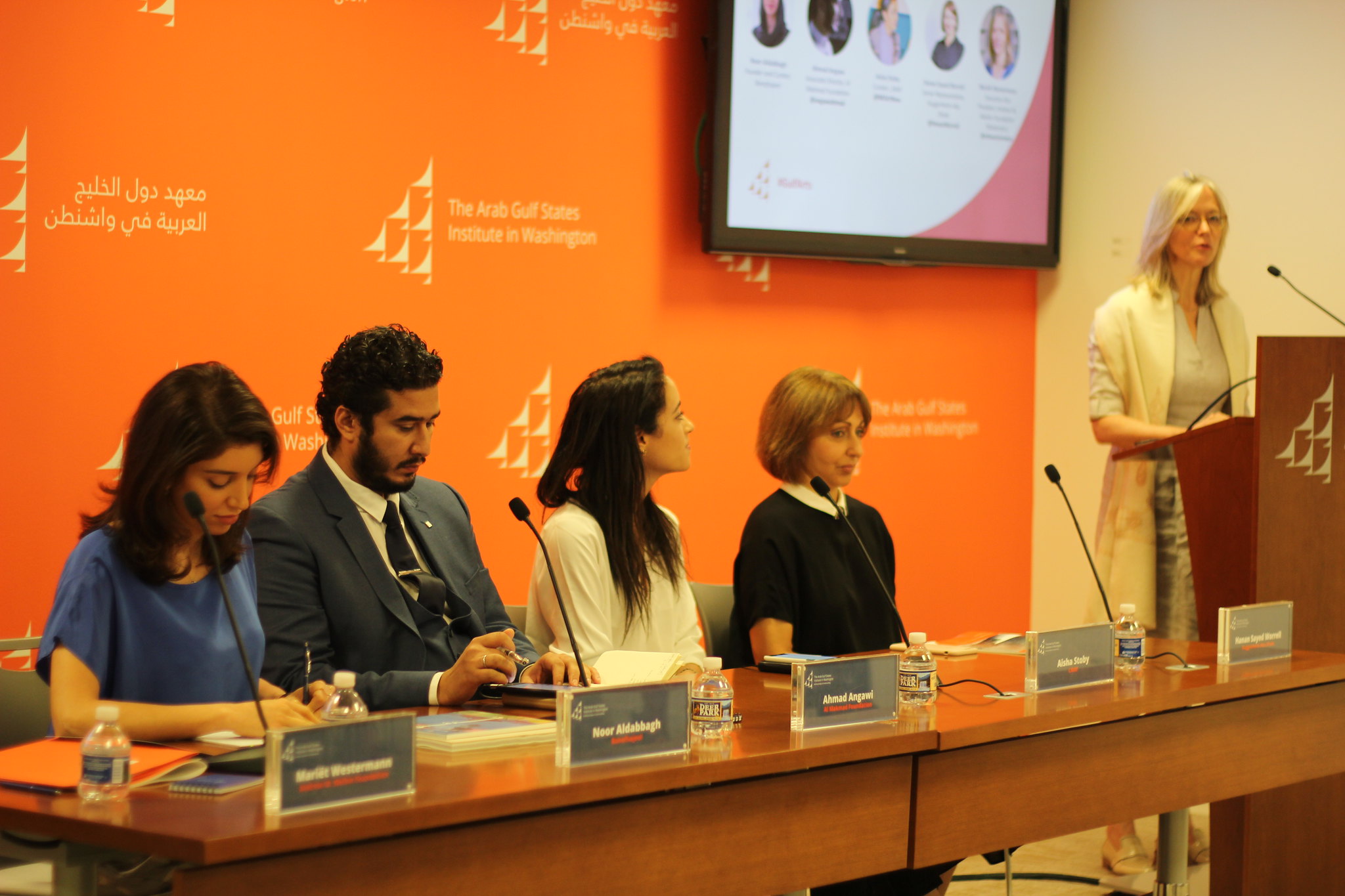