A protracted period of dramatically lower oil prices has ushered in momentous challenges for Gulf Arab states and oil producing countries around the world. AGSIW hosted a daylong conference, “Petro Diplomacy: Challenges in the New Energy World,” focusing on key drivers of the oil price outlook, upstream oil investment strategies, economic and energy policy reforms in the GCC, and the impact of lower prices on foreign policy agendas at the regional and global levels. To conclude the day, AGSIW held a public forum to present highlights and recommendations from the day’s discussion.

Kate Dourian began the discussion by examining global oil markets and the impact that the unexpected resiliency of U.S. shale oil has had on producers in the Gulf Arab states. Dourian noted that improved technology and methodology has allowed producers to cut production costs and continue supply levels that had previously been economically unsustainable. With a forecast of a continued oil supply glut well into 2017, producers in the Gulf Arab states have been left asking an important question: When will the market rebalance? This uncertainty has led many to speculate that OPEC may reevaluate its strategy and finally institute production caps, but no concrete evidence to this effect has emerged. Dourian closed by forecasting that global demand will eventually rebound, with many looking to the low-cost Gulf Arab producers to meet rising demand. She argued, however, that with the current decline in regional upstream investment, it is plausible that that expectation will not be met expediently.

Monica Malik turned her focus to fiscal reforms and outlooks for Gulf Cooperation Council countries. She explained that despite diversification efforts in several countries, oil continues to be the main source of revenue and regional governments continue to act as the primary conduit for the distribution of this revenue. Low oil revenue has historically put pressure on GCC governments and this period is no exception. However, where Gulf monarchies have usually turned to spending cuts to address deficits, they are now implementing subsidy reforms targeted primarily at fuel and utilities. The reduction in government assistance has meant that sociopolitical reforms have crept into countries with low hydrocarbon revenue per capita out of economic and political necessity. Burgeoning youth populations, stagnant growth, and continued low oil prices mean that foreign direct investment and sociopolitical and educational reforms are a must to lessen the impact of continued low oil prices.

Luay al-Khatteeb further explored differing views over oil production and looked at the impact conflict zones have on markets, focusing particularly on Iraq. While acknowledging that U.S. shale oil has factored into the oversupply in global markets, he explained that tremendous production increases from countries such as Iraq and Saudi Arabia cannot be discounted. This trend has led to a difference of opinions over the role of OPEC: Should its members focus on barrels or dollars? More specifically, should OPEC members be more concerned with controlling prices or dominating market share? While both sides present a credible argument, al-Khateeb acknowledged that OPEC’s future path and the oil markets remain uncertain.

F. Gregory Gause, III then examined the impact that international relations and geopolitics can place on energy markets. Gause began by admitting that while the influence of geopolitics on oil prices and production decisions is often embellished, there is certainly still an impact. He noted that while Iran and Saudi Arabia have typically reached agreements to put floors on oil prices, the intensity of the current geopolitical rivalry has cast doubt on any potential deal during upcoming meetings in Algiers. The tension in U.S.-Iran relations has also played a significant role in global oil markets, as unilateral sanctions outside of the Joint Comprehensive Plan of Action have created exposure concerns for U.S. companies interested in doing business in Iran. Coupled with inflated expectations in Iran to be fully integrated into global financial and commercial networks, the uncertainty has exacted its toll on energy markets. Gause concluded by turning his attention to civil conflict in oil producing countries, such as Libya and Iraq, and examined the geopolitical ramifications of these conflicts on global energy markets. 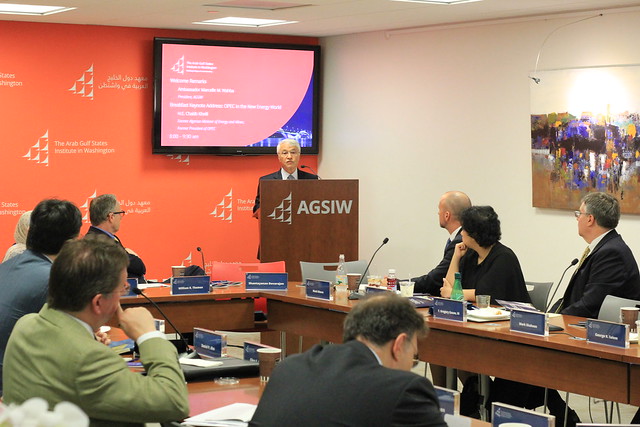