The international oil industry is in the midst of writing a new chapter in its long-storied history, with a massive restructuring underway to meet the challenges of a new lower oil price world. For its third annual conference, AGSIW brought together experts from the oil industry, finance, government, and academia to discuss critical issues facing the oil industry against the background of the shifting economic and political landscape in the region. “Petro Diplomacy: Navigating the New Oil Era,” began with a conversation with Fareed Yasseen, ambassador of the Republic of Iraq to the United States, and included several panels, as well as keynote remarks by author, journalist, and historian Anna Rubino and a public panel.

Anna Rubino discussed her book Queen of the Oil Club: The Intrepid Wanda Jablonski and the Power of Information. Rubino began by highlighting the accomplishments of the journalist Wanda Jablonski. The daughter of a petroleum geologist, Jablonski rose to fame in the journalism industry as an economic and geopolitical expert in the United States in the 1950s, at a time when women rarely held positions of influence in journalism. As one of Jablonski’s accomplishments, she was credited with arranging a 1959 meeting in Cairo, which brought together oil ministers in the Middle East to sign an agreement that led to the formation of the Organization of the Petroleum Exporting Countries. Rubino highlighted how, at the time, Jablonski succeeded in giving a voice to many speakers who were being ignored by the international media. She described how Jablonski left an indelible mark on three worlds: the world of oil, the Middle East, and the field of business journalism.

Ibrahim Al-Muhanna, Energy Consultant, Vice Chair for the Middle East, World Energy Council; Member of the Board of Directors, AGSIW

Karen E. Young began the discussion asking Elena Ianchovichina how oil exporting countries are adjusting their economies to be less dependent upon oil revenue. Ianchovichina responded that they are implementing different measures to prepare for reduced demand for oil, including imposing domestic taxes and rationalizing budgeting and spending. The Gulf countries have also halted originally planned investment in the oil sector, and are instead developing policies to encourage the development of other sectors.

Young then turned to Jason Bordoff and asked how politics have affected liberalization of the energy market and what has been the market’s response. Bordoff pointed out that even with this new direction, there is still a large demand for oil; electric cars only make up a small proportion of the market, for example. He also noted that shale has many limitations, and is not seen as a viable alternative.

Jean-François Seznec noted that in the 1990s there was a lot of tension in Saudi Arabia because the government was borrowing from its own bank. This highlighted the volatility of the oil market. Oil producers are again facing a volatile period. He noted that 85 percent of the private sector in Saudi Arabia is owned by international interests ostensibly to reduce costs and save money. However, Seznec observed that Saudi professionals are equally as hard working and sophisticated as their international counterparts. He additionally mentioned that the competition between Russia and Saudi Arabia is also serving as a game changer with respect to oil prices. Seznec said he was not alarmed by the current debates going on among the Gulf countries, and he feels that the market will evolve in a positive direction.

Finally, Ibrahim Al-Muhanna suggested the main issue to focus on right now is the international conflicts regarding the oil industry and trade. He said oil producing countries are now the targets of geopolitical negotiation. The latest development, according to Al-Muhanna, is the new paradigm with Russian involvement in the Middle East oil economy. He stressed, it is important to prevent escalating tensions around the oil industry, because conflicts will play out domestically more than regionally. He also mentioned the situation is complicated by Saudi Arabia’s own high oil consumption. 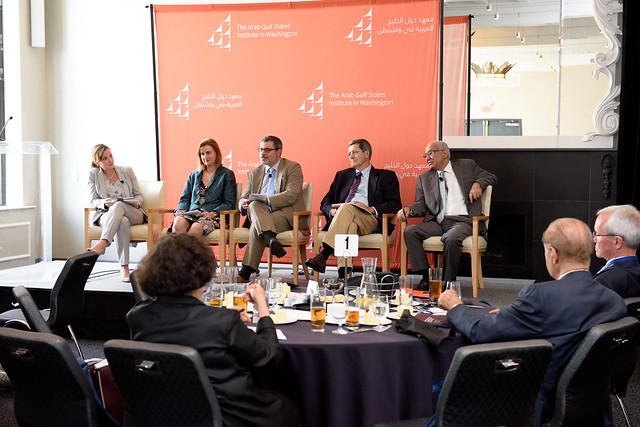