1001 Lights illuminated AGSIW on Friday November 20 with Najla AlKhalifa’s latest exhibition. The esteemed photographer from Saudi Arabia presented her work of photographs taken in Saudi Arabia, Japan, and London. AlKhalifa is the recipient of 32 international and local awards for photography as well as a photography instructor. Currently, she is the only woman who has been awarded the Golden Medal in the French PX3 photography competition.

1001 Lights, AlKhalifa’s latest collection, showcases the lesser known beauty of the Saudi Arabian desert landscape in contrast with the lushness of the Japanese bamboo forests and the English autumn. AlKhalifa’s work reveals the stark contrast between the smooth, golden Saudi Arabian sands and the stunning blue sky. AlKhalifa conducts a mystifying visual study of the Waba Crater, an ancient volcanic basin covered in crystals, among other dazzling works.

AlKhalifa spoke about the importance of the multitude of life stories in the world and the representation of her own story through her photographs. At the same time, she hopes everyone can reflect on their own life stories through her images. Prince Abdullah bin Faisal bin Turki bin Abdullah Al Saud, the newly appointed ambassador of Saudi Arabia to the United States, attended the reception and made some of his first public remarks in Washington, emphasizing the importance of cultural expression and praising AlKhalifa for her work. 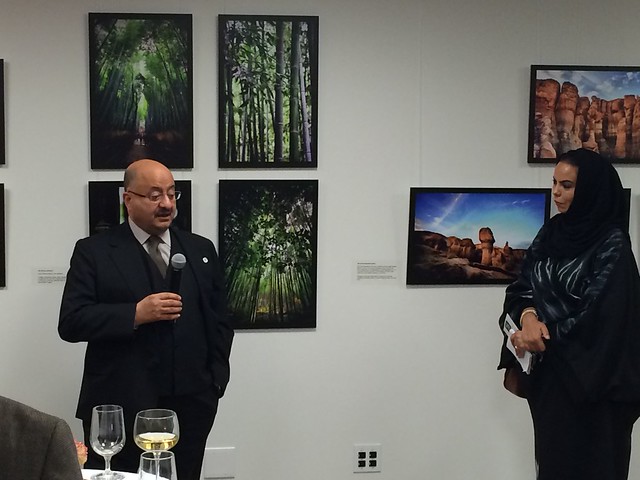