Poetry plays an important role in the daily reality of the Gulf Arab region. Far from being a relic of the past, it has extended its influence through television and the Internet to reach an audience of millions. From Nabati poetry to spoken word, Gulf poetry tells a story of current social and political concerns and narrates shifts in cultural and societal norms in a fast changing region.

At Busboys and Poets in Washington, DC, AGSIW presented “Riwaya,” a celebration of heritage in poetry and music drawing from the diverse cultures of the Gulf Arab states. The program featured poets Afra Atiq, Salem Al Attas, and Fatima Al Hamad, as well as the Saltanah Musical Ensemble.

Afra Atiq started talking at eight months old, and as her mother put it, she was never quiet again. She is the first Emirati female spoken word artist who has performed (and slammed) on local and international stages. She was named Best Performer for 2015-16 by Rooftop Rhythms. She has a master’s degree in international relations and diplomacy, specializing in Middle Eastern politics, gender policies, and power dynamics; however, performing takes center stage in her life. Atiq is the second in command of Untitled Chapters, the only literary hub for Emirati women. She enjoys giving back to the community through workshops and mentorships. She has been a featured performer/speaker at platforms like TedX, NYUAD, Salama Bint Hamdan Al Nahyan Foundation, ADMAF, and Sheraa Sharjah. Atiq is currently a PhD candidate at UAE University and writes regularly for Gulf News.

Salem Shukri Al Attas is a spoken word poet who began performance poetry in 2012. Since then, he has won several poetry slam competitions and awards including Performer of The Year 2014 and the Abu Dhabi Grand Slam Finale Championship hosted by Rooftop Rhythms. Attas also co-hosted the First Annual Abu Dhabi International Poetry Festival and has given numerous workshops on performance poetry and delivery. Attas remains active in the community by giving talks to students on performance. He was also a guest performer at the PATCHconference held at NYUAD among other events.

Fatima Al Hamad is an architect who loves to write poetry. At the age of 16, she burnt all her journals for fear of people seeing her work. She always hid it until she was encouraged to display her work through @faswords, an Instagram account where she combines music, art, poetry, and architecture. For her, words can be applied everywhere, and anywhere with no limitations. For her, this is the one journal she will not burn. She recently started a poetry event called Word Of Mouth Kuwait (@wordofmouthkw), where artists and poets collaborate and share their work publicly through spoken word poetry. 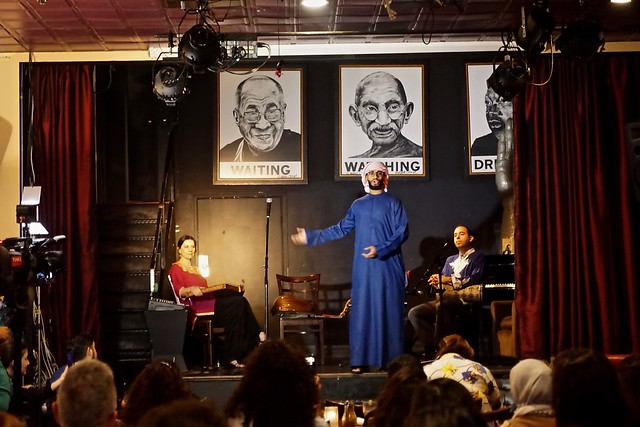