On December 12, municipal council elections were held for the third time in Saudi Arabia. The third round was the first in which women were included as voters and as candidates. Over 900 women contested for 2,100 seats around the kingdom. Twenty one women were elected, including Rasha Hefzi, who joined the panel held at AGSIW on December 17 to discuss the elections and their impact on women. The inclusion of women in these elections was preceded by a decade of activism from various individuals and groups around the kingdom, most notably the Baladi Initiative, which sought to achieve full participation of women in the municipal council through reintegration and raising awareness. Two of the panel’s participants were Baladi activists who drew upon their years of efforts to discuss the importance of the elections, their activism leading up to the elections, as well as the general situation of women’s rights in the kingdom.

Hatoon Al-Fassi, called the 2015 elections a historic moment and said that the excitement leading up to election day was “explosive.” She noted that the Baladi Initiative’s main goal, to be acknowledged as full citizens in the elections, had finally been accomplished and discussed the group’s activism since 2004 when municipal elections were first announced for the kingdom. For Al-Fassi and other women’s rights activists, writing has been the only podium and public sphere to communicate their ideas and opinions; she and fellow panelist Nailah Attar regularly used this medium to advocate for the inclusion of women in the elections.

Attar, who was in charge of Baladi’s Awareness campaign, discussed the program’s work in Jeddah and Riyadh despite being unlicensed and the difficulty the group faced as it operated in the absence of civil society laws. She spoke about Shareeka, a campaign that sought to educate the public about the importance of the inclusion of women in the municipal council, given the newness of elections to Saudi society. Attar elaborated on the group’s efforts to ensure the success of fellow activist Rasha Hefzi who won the elections as a representative in Jeddah.

Hefzi, the only Baladi candidate to have won in the elections, discussed the challenges she faced running an election campaign, such as low registration of voters, the obstacles citizens faced registering, as well as the low election awareness in her community. She elaborated on her campaign strategy: to raise awareness about registration and voting in Jeddah and to consolidate votes in a district where notable businessmen and conservatives campaigned against her. Hefzi noted that the role of the municipal council, though seemingly limited in power, had the potential to be a platform for women to work within their neighborhood toward change.

Aziza Youssef, a long-time activist in the women’s driving campaign, noted that these elections effectively changed the relationship between citizens and their government and spoke about her belief that this marked a turning point for the government to be more accountable to its citizens. Youssef, who supports all the candidates, elaborated on her decision to boycott the elections as Saudi women remain second-class citizens, facing basic challenges on a daily basis because of the guardianship system, which severely limits their independence. 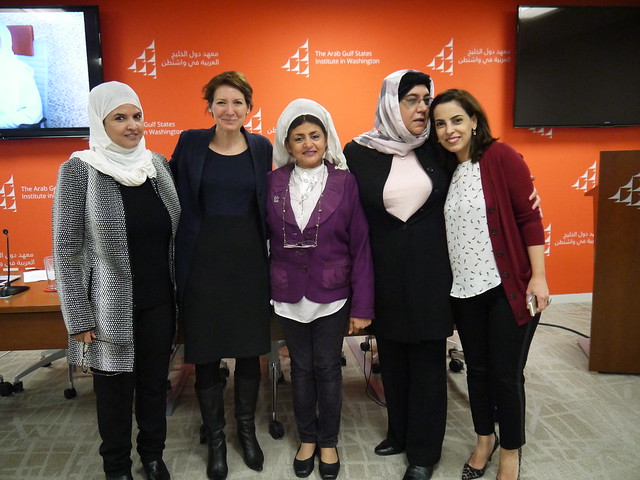