Few regions of the Middle East are more important but are less understood than Asir, Najran, and Jizan. The three southern Saudi provinces, which account for a quarter of the country’s population, have been on the front lines of Yemen’s bloody civil war while serving as the birthplace of the Saudi contemporary artistic movement – the subject of Sean Foley’s new book, Changing Saudi Arabia: Art, Culture, and Society in the Kingdom.

In this presentation, Foley drew on his extensive research in the three provinces to trace the rise of the Saudi contemporary artistic movement while explaining what it tells us about the kingdom’s society in the 21st century. In particular, he focused on how the movement first emerged in the visual arts in the south but soon transformed into a national force drawing in artists working in genres from stand-up comedy to film. Thanks in part to the skillful use of social media, Saudi artists have helped to shape debates on women’s driving and other controversial issues. They have also influenced Vision 2030 – Crown Prince Mohammed bin Salman’s ambitious plan for modernizing Saudi society while weaning it off of its dependence on oil exports. Indeed, some artists from the south, such as Ahmed Mater, now hold leadership positions in institutions closely linked to Vision 2030. 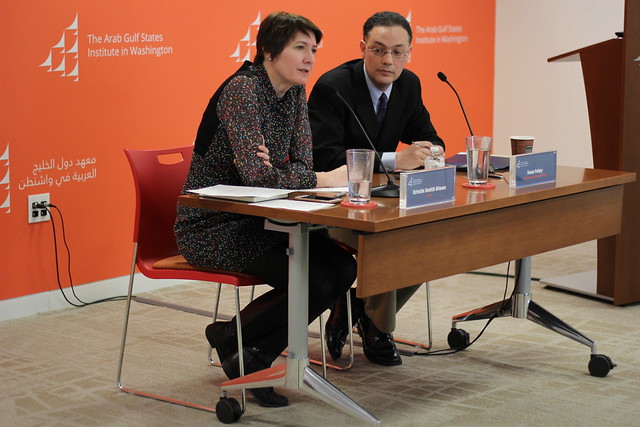