AGSIW hosted a roundtable discussion with Elizabeth Dickinson, senior analyst for the Arabian Peninsula at the International Crisis Group.

With extensive experience in the Gulf, Dickinson shared insights from her research on critical regional issues. The discussion focused on Gulf-Horn of Africa ties and the ongoing conflict in Yemen and was moderated by AGSIW Executive Vice President Stephen A. Seche.

Elizabeth Dickinson joined the International Crisis Group as a senior analyst for the Arabian Peninsula in late 2017. Her work focuses on the six countries of the Gulf Cooperation Council. Previously a journalist, she has lived in the region for seven years and has written extensively on Gulf regional foreign policy, counterterror finance, and political reform. Prior to joining the International Crisis Group, Dickinson worked for a decade as a journalist, including roles at Foreign Policy magazine, The National, and The Economist. She graduated Cum Laude from Yale University, with a degree in African and international studies. An Overseas Press Club scholarship recipient, she has reported from five continents and speaks French, Spanish, and Krio (Sierra Leone), as well as basic Yoruba and Arabic. 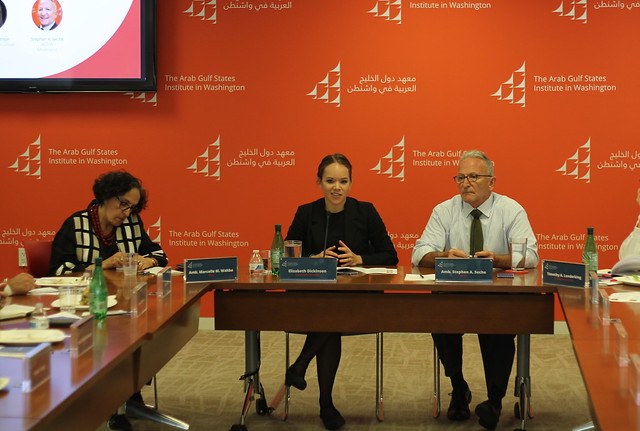