AGSIW hosted a conversation with Abdel Aziz Aluwaisheg, assistant secretary-general for political and negotiation affairs for the Gulf Cooperation Council.

One year after U.S. President Donald J. Trump’s landmark visit to Saudi Arabia, is another U.S.-GCC summit on the horizon? This discussion focused on U.S.-GCC relations and recent developments in the region. Ambassador Marcelle M. Wahba, AGSIW president, moderated the discussion.

Abdel Aziz Hamad Aluwaisheg is the assistant secretary-general for political and negotiation affairs for the Gulf Cooperation Council. In this capacity, he is responsible for managing GCC relations with the rest of the world, as well as the coordination of GCC foreign policy toward regional and international issues. These include GCC trade negotiations, strategic partnerships, and dialogue with other countries and blocs. Before assuming the post of assistant secretary-general in 2011, he served as GCC director general for international economic relations (2009-11) and director of economic integration, where he worked for 10 years overseeing the GCC economic integration process. Between 2002 and 2011, he was also responsible for the establishment of the GCC Common Market, launched in December 2007. Aluwaisheg studied law at Columbia University, economics at New York University, political economy at the New University for Social Research, and the art of negotiation at the Harvard Law School’s Negotiation Institute. He has taught at a number of U.S. and GCC universities, most recently at Georgetown University. 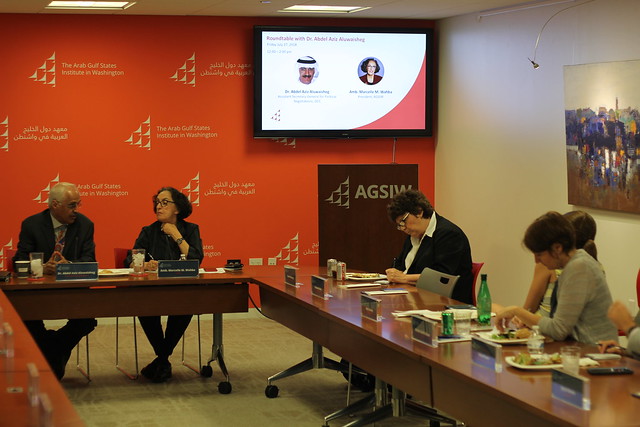