While suffering the mantle of the poorest country in the Middle East, Yemen has faced massive economic hardship due to the war, including the destruction of farmlands, factories, and other essential parts of the state infrastructure.

On September 18, Yemeni President Abd Rabbu Mansour Hadi announced the temporary transfer of the country’s central bank – one of the last standing neutral institutions in Yemen – from the capital Sanaa to Aden, a move that was largely seen as an attempt to economically weaken the Houthi rebels who seized control of the country in February 2015 and are currently fighting Hadi and the Saudi Arabia-backed coalition of Arab states.

What is the current state of the financial infrastructure in Yemen and is it possible to quantify the economic cost of the war? Why did Hadi choose to move the central bank to Aden and what effect will this have on the country’s already tattered economy? Can the Yemeni central bank operate in the current climate and can its relocation pressure the Houthis into peace negotiations? How might this move affect public opinion toward Hadi and the Saudi-led coalition?

This AGSIW discussion, led by Rafat Al-Akhali, former Yemeni minister of youth and sports, and co-hosted with Yemeniaty, considered the current state of the Yemeni economy and the potential impact of the policies regarding the central bank on Yemen’s economy and its effect on a peace agreement. AGSIW Senior Resident Scholar Karen E. Young moderated the discussion. 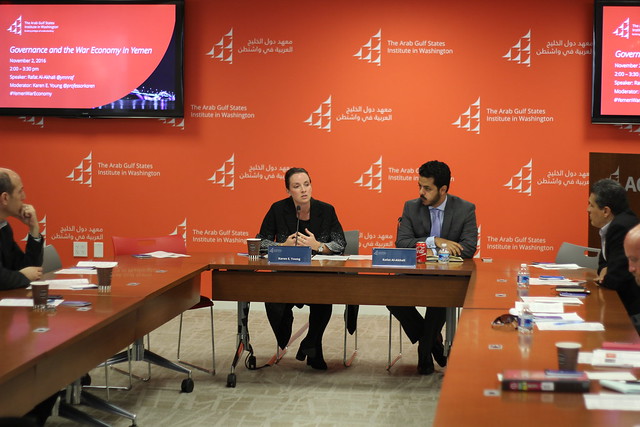