The countries of the Gulf Cooperation Council are increasingly playing a more assertive role in the region. Amid geopolitical shifts, the Gulf Arab states have repositioned themselves as centers of regional power with global reach. AGSIW hosted a discussion on May 26 with the authors of two recent releases showing how the Gulf states are transforming their roles in the international system.

David Roberts, a lecturer in the Defence Studies Department, King’s College London and author of Qatar: Securing the Global Ambitions of a City-State

Kristian Coates Ulrichsen, a Baker Institute Fellow for the Middle East, Rice University and author of The Gulf States in International Political Economy

Kristian Coates Ulrichsen examined how the Gulf states have emerged as influential regional and international actors since 2000. He noted that the Gulf states acknowledged the discrepancy between state size and power, arguing that the establishment of Al Jazeera allowed Qatar a platform to leverage soft power across the Arab world and brand itself as a modern state. However, Ulrichsen argued that soft power by itself is not enough. Ulrichsen further remarked that the Gulf countries have made extensive commitments to their populations but have underdelivered, citing their disappointing record of “Vision Plans.” To overcome this, he stressed the importance of implementation.

David Roberts examined the origins of Doha’s foreign policy formation in light of domestic, regional, and international factors. For Roberts, the central question is what Qatar is doing as a state and why. A recurring theme is Doha’s outsized regional and international role and its do-it-alone approach. Roberts noted that the establishment of Al Jazeera coincided with the collapse of BBC Arabic in Saudi Arabia and like Ulrichsen, noted its utility as a tool of soft power. When it comes to the post-energy future of the Gulf states, Roberts thinks that Qatar is on the safe side given its small population, its vast natural gas resources, and rigorous educational endeavors.

David Roberts is a lecturer in the Defence Studies Department at King’s College London. Previously, he was the director of the Qatar office of the Royal United Services Institute for Defence and Security Studies (RUSI) Qatar. His primary research interest focuses on Qatar’s foreign policy. Roberts is the author of Qatar: Securing the Global Ambitions of a City-State. He obtained his PhD from Durham University.

Kristian Coates Ulrichsen is a Baker Institute fellow for the Middle East at Rice University. His current research examines political, economic, and security trends in the Middle East and, in particular, the GCC states’ changing position within the global order. He is the author of numerous works including The Gulf States in International Political Economy, Qatar and the Arab Spring, and Insecure Gulf: The End of Certainty and the Transition to the Post-Oil Era. Coates Ulrichsen obtained his PhD in history from the University of Cambridge.

Hussein Ibish is a senior resident scholar at the Arab Gulf States Institute in Washington. He is a weekly columnist for The National (UAE) and a monthly contributing writer for The International New York Times. Ibish is also a regular contributor to many other U.S. and Middle Eastern publications. He has made thousands of radio and television appearances and was the Washington, DC correspondent for the Daily Star (Beirut). Ibish previously served as a senior fellow at the American Task Force on Palestine (ATFP), and executive director of the Hala Salaam Maksoud Foundation for Arab-American Leadership from 2004-09. From 1998-2004, Ibish served as communications director for the American-Arab Anti-Discrimination Committee. He has a PhD in comparative literature from the University of Massachusetts, Amherst. 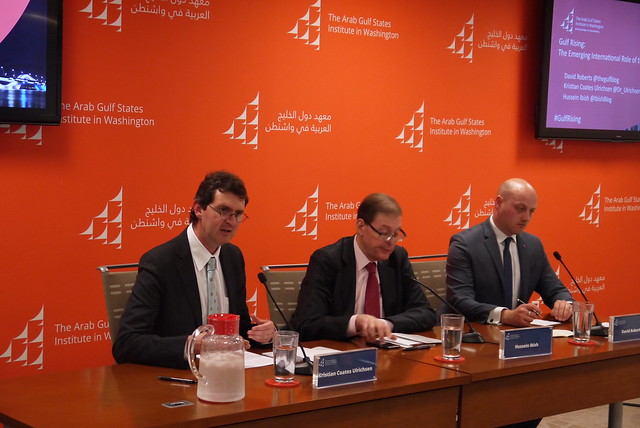