On September 28, the U.S. Congress handed President Barack Obama his first veto override while in office. The emotional and political potency of the Justice Against Sponsors of Terrorism Act (JASTA) was illustrated by the lopsided vote: Only one senator and 77 members of the House of Representatives opposed the bill. The law allows Americans to sue Saudi Arabia and its officials for alleged complicity in the 9/11 terrorist attacks by dispensing with the international legal convention of sovereign immunity. But it could also result in the U.S. government and officials facing endless lawsuits and prosecutions around the world. Immediately after it passed, lawmakers began expressing regret and discussing the need for some remedy. AGSIW hosted a panel discussion examining JASTA and its various impacts, as well as the international response and implications for U.S.-Saudi relations.

Bernard Haykel, professor of Near Eastern Studies at Princeton University

Bernard Haykel began the discussion by describing Saudi sentiments toward JASTA as a culmination of events indicating a weakening relationship and a general sense of abandonment among those within the kingdom. The Saudis view JASTA not only as unwarranted, but simply not based on facts. Haykel mentioned that the kingdom has been fighting the same extremist groups in cooperation with the United States within its own borders, and that the Saudis feel they have been blamed for a crime that they did not commit. He also pointed out that the fact that 15 of the hijackers were Saudis was no mistake; Osama bin Laden wanted to drive a wedge between Saudi Arabia and the United States. However, despite the rising tensions, Haykel said he thinks the relationship can be restored if Saudi Arabia continues to emphasize the economic relationship between the two countries and further demonstrates its efforts in combating extremism.

Fahad Nazer continued to explore Saudi reactions to the passage of JASTA by discussing the reactions of government officials, as well as those from different media outlets. Nazer said the reaction from government officials was very measured, but noted that traditional and social media commentary was much harsher. While the government focused on the challenge JASTA poses to sovereign immunity and issues of international relations, the feeling from the general public was one of further abandonment. Many Saudis believe that Obama has not appreciated the history of the bilateral relationship, and following the Obama administration’s policies in Syria and Iran, that JASTA is only adding “insult to injury.” However, Nazer expressed optimism about the future of U.S.-Saudi relations, stating that the current ties cannot be discounted and ultimately the alliance will survive.

David Frum then explained the passage of JASTA as a change in both the political weather and overall climate. He noted that he believes the corrosion of sovereign immunity began in the 1960s, when ideas of sovereignty in the South were changed during the civil rights movement. Frum said the second change has come with the impatience for political justice; people now want to “judicialize” political problems, especially international ones. However, he said that courts are a poor solution to these problems because they only take into account one factor, missing the many nuances that are vital to international relations. Frum also maintained that the Obama administration has continued to lose its grip on Congress, allowing Congress to dictate major issues to the White House. Along with Obama’s rebasing of U.S. foreign policy, these factors led to the passage of JASTA.

Before opening the conversation to questions, Prince Turki al-Faisal made some remarks to the audience. He said he believes that JASTA is targeting one of the United States’ most faithful allies, and that it ultimately victimizes a victim of terrorism as well. He expressed his anger at what he perceives as the promotion of political gain under the guise of combatting terrorism, and frets that Osama bin Laden may have successfully driven a wedge between the two allies. However, he noted he remains optimistic that the partnership is too strong to falter, and believes this course can be reversed if international justice is left for the world to administer, rather than national institutions. 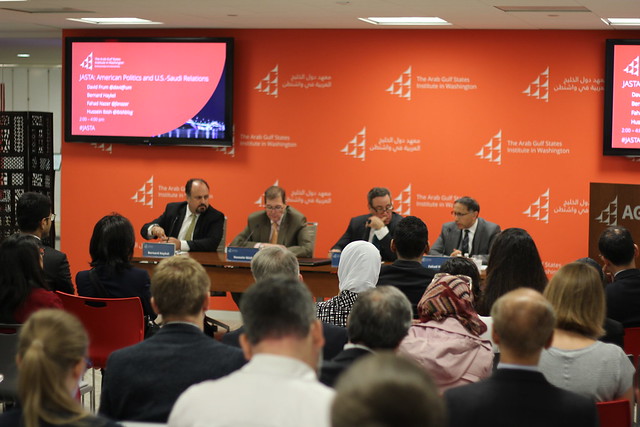