Lower oil prices are challenging the traditional labor system in the Gulf, built largely from a migrant labor force. On February 17, the Arab Gulf States Institute in Washington hosted a panel discussion examining labor dynamics in the Gulf, focusing on the rules that regulate labor inside the Gulf Cooperation Council states and some of the economic benefits of imported labor, as well as the challenges for rights protection and knowledge transfer.

The discussion covered shifting labor demographics in the Gulf arising from the decline in oil prices and what the economic downturn would mean for the labor market and the overall economy of GCC states. The panelists delved into labor market reform and diversification efforts as well as the development of knowledge economies in the Gulf.

Attiya Ahmad discussed the trajectory of labor dynamics in the GCC, drawing on specific examples from her research in Kuwait. She discussed some of the social and historical reforms that have taken place in the region in a broader context. She additionally noted the importance of gender, national identity, and citizenship laws when addressing the implications of labor laws, rights, and protections. Ahmad particularly stressed the diversity in workers’ experiences, emphasizing the need for deeper analysis of their specific accounts. Ahmad noted that there are gaps in these narratives, specifically related to the middle class, that are needed to improve the understanding and conceptualization of the current situations faced by migrant populations.

Kristian Coates Ulrichsen highlighted the need to amend the Gulf social contract and the paradox that no one seems to know what direction these changes should take. He went on to explain that the “best-case scenario” would be that citizens at all levels would realize that immediate changes in labor need to happen. Ulrichsen addressed a number of societal issues, including the implications of education in the region and any effect this may have on the labor force. Most migrants are not aware of the situations they will be getting into when they reach receiving countries; additionally, the imbalance in power between employer and employee offers migrant workers little to no ability to protest or share their experiences.

Omar Al-Ubaydli argued for interventions to reduce the number of migrant workers arriving in receiving countries under false pretenses, noting that while the reality is that most migrant workers prefer “inferior” conditions in GCC countries to not coming at all, conditions are frequently misrepresented by domestic recruitment agencies. He encouraged the GCC and sending countries to cooperate with one another in order to reduce the number of misrepresentations and protect workers’ rights. Al-Ubaydli went on to discuss the role of the public sector in stiffing citizen workers’ productivity and innovative capacity, citing that public sector wages are in no way commensurate of any measure of workers’ true productivity. 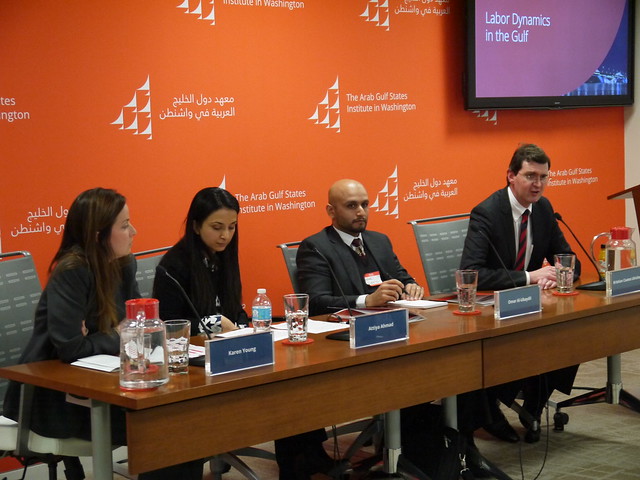