The panel focused on the Trump administration’s shifting strategies and rhetoric with regards to the Joint Comprehensive Plan of Action nuclear agreement, the level of U.S. commitment to helping shape the outcome of the Syria conflict, and U.S. declarations encouraging recent protests in Iran. Ibish began the discussion by stressing how the current administration’s tougher rhetoric on Iran, relative to the Obama administration, is linked to more aggressive strategies and tougher policies in the region that include deeper engagement in Syria; a shift in focus from the Islamic State in Iraq and the Levant to rolling back Iran’s regional presence; more overt support for Iranian protestors; and an increased animosity toward the JCPOA. The panelists elaborated on how the JCPOA factors into a broader Iran policy and its implications for the Gulf Arab states. Ziadeh asserted that the Gulf Arab countries, especially Saudi Arabia and the United Arab Emirates, were not pleased with being left out of JCPOA negotiations and see an opportunity with the Trump administration to renegotiate the agreement in favor of the Gulf Cooperation Council. Salem argued that, while the deal is likely to hold up, Trump’s attitude toward it will isolate the United States diplomatically.

The panelists then directed their attention to the Syrian crisis and the roles of the United States, Iran, and Russia as well as implications for the GCC. The panelists all agreed that Russia is playing a larger role in the Syrian conflict and that the United States has scaled up its more limited role as well. Salem emphasized that Russia and Iran are involved in Syria in the long term due to regional interests; Iranians and Russians themselves have a relationship characterized by historical animosity and distrust despite overlapping interests in Syria. According to Alfoneh, the Iranian Islamic Revolutionary Guard Corps’ strategy in Syria has succeeded, as President Bashar al-Assad’s position has been secured with a limited loss of Iranian lives. However, Iranians are protesting against their government’s expenditures in Syria, which could lead, at some point, to changes in Iran’s Syria policy. Ziadeh provided a GCC perspective, explaining that the Gulf Arab states have realized that their desired outcome of regime change may not occur in Syria.

Ibish asked the panelists how Iran impacts the Israeli-Palestinian conflict, the war in Yemen, and respective efforts to solve these conflicts. Ziadeh explained that the United States is attempting to bring the GCC in on a potential peace process leading to a new deal that will be presented to the Palestinian Authority. She dismissed the Trump administration’s hopes that the Gulf states will aid in finding a solution as wishful thinking. Salem answered that the Obama administration made significant progress on Yemen, but the current administration has not focused on this conflict. He expressed his belief that from the Iranian perspective an ideal solution would be a two-state solution for Yemen, so that there is no need to give concessions to the Houthis, which would give them leverage over the Americans.

The discussion returned to the topic of the JCPOA, specifically whether President Trump will decide to withdraw from the agreement. Ziadeh argued that the United States will not withdraw, but the administration could seek further amendments to the agreement. For example, Trump could look to expand access beyond nuclear facilities to military sites. In the short term, the Iranian government would gain some local support from pulling out of the agreement. However, the United States would lose European trust if they were to pull out. Iran does want to integrate into the global economy, and the JCPOA is an important tool of leverage.

Ibish turned the discussion back to changing American policies toward Iran. Alfoneh explained that Iranian analysts are busy trying to understand Trump’s approach, but there remains a lot of uncertainty. Ziadeh described the different approach in temperament, understanding, and assumptions under the current administration compared to the Obama administration. Under Obama, the United States was not as aggressive as it could have been in JCPOA negotiations and was willing to consider trade-offs. However, the Trump administration feels that they have strong partners in the Gulf, Israel, and possibly Turkey, and is therefore less willing to consider trade-offs.

Ibish queried Alfoneh on how the United States could support positive political change in Iran. Alfoneh explained that Washington needs both a clear strategy and creative thinking, both of which are lacking in this administration. The United States needs to decide if a technocracy or military dictatorship in Iran is most favorable to its interests in the region, and should support the more favorable faction.

The panel closed with a final question on whether the Gulf Arab states have reason to worry about a possible warming in U.S.-Iran relations. Salem indicated that there is no chance of a thawing of relations under the Trump administration. He quipped that an explosion is more likely. 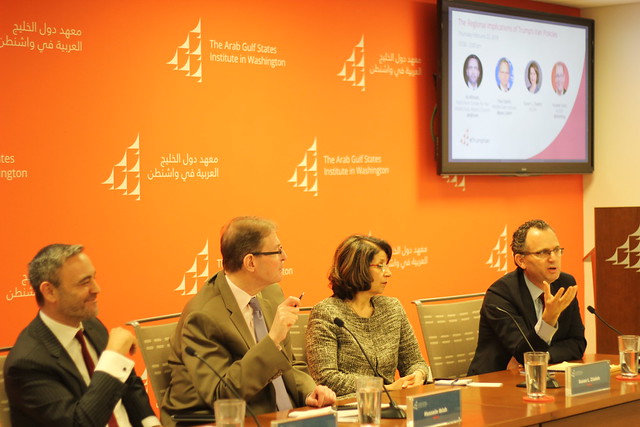