On January 12, AGSIW hosted a panel discussion examining a wide range of issues arising from the flare-up between Saudi Arabia and Iran in the aftermath of the execution of a leading Saudi Shia dissident cleric, the attack on the Saudi Embassy in Tehran and the severing of diplomatic relations between the two countries.

How far will the Saudi-Iranian confrontation grow? Is the Middle East trapped in a sectarian confrontation, or can other factors provide an alternative framework that enhances regional stability? What will the impact be on a wide range of American policy goals, including the battle against ISIL and other terrorist groups, the quest for peace in Syria, and vital issues involving Iraq, Lebanon, Yemen, and other regional hotspots? How will Washington manage its increasingly tense relationship with a traditional ally, Saudi Arabia, while seeking a new relationship with a traditional foe, Iran, in the context of the nuclear agreement? And how will these two states manage not only their relations with each other, but also with the United States?

Barbara Slavin, Acting Director of the Future of Iran Initiative at the Atlantic Council

David Ottaway discussed the current situation in Iran as an expression of the divisions within the government over issues dealing with foreign policy. Ottaway noted that the new government in Saudi Arabia under King Salman has made it a policy to push back Iranian influence in the Arab world. He believes that the executions carried out were “unnecessarily inflammatory,” which in turn sent a message to all opposition groups in Saudi Arabia. The struggle and the rise of confrontations within the Arab world are not a new phenomenon and have been occurring for decades.

Randa Slim described the dynamic of Shia versus Islamic power within Iran and noted that in order for Iran to become a leader in the Islamic world, the country must work with Saudi Arabia. She expounds on this point by explaining Saudi Arabia as an entry point into the Sunni Arab world, hence both countries should work towards becoming co-leader Islamic powers. Slim described the current rivalry between the two countries as hurting the region as a whole and that the re-establishment of certain rules and protocols should be put into place.

Barbara Slavin noted the various cultural nuances and social undertones that exist between Saudi Arabia and Iran. Slavin provides the Iranian perspective on the frustrations of the government toward Saudi Arabia, as well as their continued support for the Shia populations in neighboring countries such as Bahrain. As Iran tries to expand its presence in the region, Slavin touches on the threat of ISIL and other influences by Yemen and Syria. 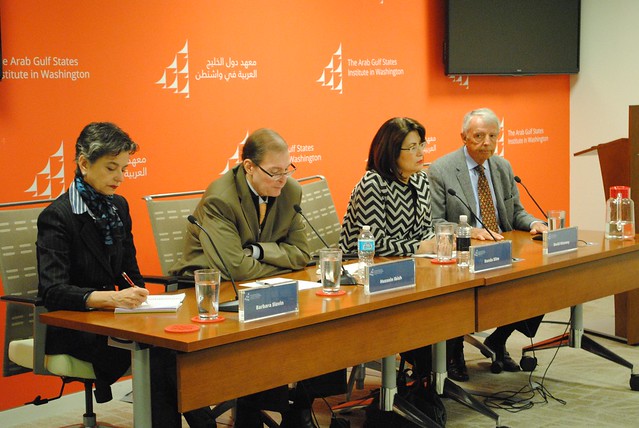