The past half century has seen unprecedented modernization and growth among the oil-rich Gulf Cooperation Council countries, which today rank among the world leaders in per capita income. However, GCC leaders recognize that oil resources alone cannot sustain economic prosperity over the long term, and so are seeking to create a diversified private sector that generates income from a variety of thriving industries. The transformation of Gulf economies requires a restructuring from existing patterns of state-led industrialization and dependency on government expenditure, to new policies that promote economic inclusion of men and women, citizens and non-nationals, in these dynamic and youthful societies.

To further our understanding of how the GCC countries, especially the United Arab Emirates, can achieve this ambitious goal, UAESF 2017 outlined the major challenges for and roadblocks to economic transformation, as well as opportunities for success.

Under the patronage of H.E. Sultan Al Mansoori, the minister of economy of the United Arab Emirates, the second annual UAE Security Forum brought together decision makers and business leaders to identify promising opportunities for private sector growth and innovation with special attention to the security sector, as an engine of economic growth, job opportunities, and technological advancement.

Read Karen E. Young and Michael Elleman’s backgrounder on the current defense industry market and production capacity in the Gulf Arab states as well as Ambassador Marcelle M. Wahba’s commentary on economic transformation in the Gulf. 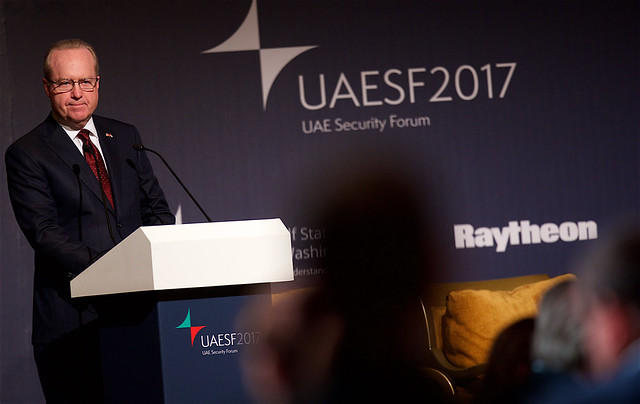