What is Russia’s ultimate endgame in Syria? How is the Russian-Saudi relationship affecting current negotiations? What role does ISIL play in the current civil war? All these questions and more  were discussed by Mark Katz, Bessma Momani, Fahad Nazer, and Hussein Ibish at AGSIW on November 9.

Katz, professor of government and politics at George Mason University, began the discussion by outlining Russian motives. He stated that the greatest incentive for Putin was maintaining the Assad regime and additionally noted that Putin is loyal to Syrian president Bashar al-Assad as a person. According to Katz, Russia sees itself as the architects of a grand coalition that can cooperate with both Sunni and Shia factions. Ibish, a senior resident scholar with AGSIW, expanded on that statement saying that keeping Assad in power is a minimal goal for Russia while an overarching aim is a large Middle Eastern alliance.

Fahad Nazer, a non-resident fellow with AGSIW, began the discussion on the question of Russia’s alliance with Saudi Arabia, claiming that it was interesting that Russia and Syria were involved together in Syria talks. Katz reinforced Nazer’s point by stating that Moscow views Saudi Arabia in the same way that Washington views Tehran. However, Nazer also noted that several Saudi analysts recently claimed that Saudi Arabia needs to build stronger relations with Russia. Bessma Momani, senior fellow at the Center for International Governance Innovation, stated that Russian-Syrian relations, a key aspect of Russian-Saudi relations, was merely a marriage of convenience that is only temporary for Putin.

Finally, when discussing ISIL, Ibish said that the group is necessary for Assad to remain in power. For Russia, ISIL’s presence allows them to frame resolution options as choosing between Assad and ISIS. Momani stated that As long as Putin can play up the idea that Chechnyan fighters can return to Russia after serving in ISIL, he will have support from the Russian people on Syria. Nazer believes that the ISIL we know today would not exist without the Syrian civil war. Ibish closed the discussion by noting that while Syria is facing dire circumstances and almost unsolvable problems, things are never the worst as long as we can say, “This is the worst.” 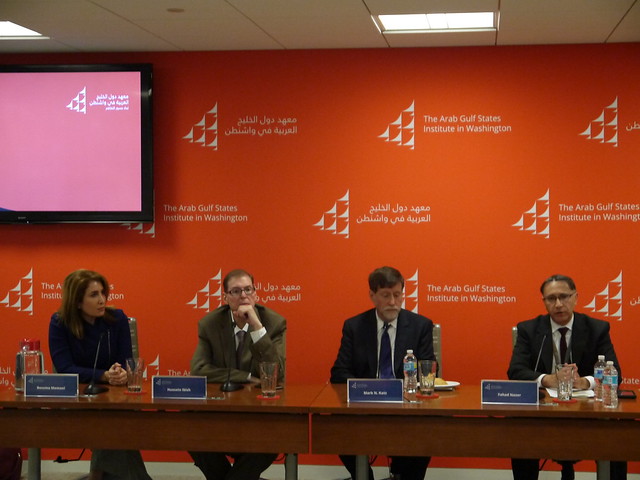