AGSIW hosted a conversation with Reem Al Hashimy, minister of state for international cooperation of the United Arab Emirates. The roundtable discussion focused on the UAE’s role in the conflict in Yemen, both in terms of ongoing efforts to liberate the crucial port city of Hodeidah from rebel control as well as provision of humanitarian relief to the Yemeni people. In addition, Al Hashimy provided the UAE’s perspective on the historic reconciliation just reached between Ethiopia and Eritrea, and discussed the UAE’s role in bringing it about.

H.E. Reem Bint Ebrahim Al Hashimy was appointed in February 2016 as minister of state for international cooperation. She joined the federal government in 2008 as minister of state and had a vital role in dealing with a number of foreign and vibrant issues of the UAE such as the UAE’s bid to host the World Expo 2020 in Dubai, where she holds the position of director general and board representative on the higher committee of the EXPO 2020 Dubai, in preparations for this megaevent. Al Hashimy manages the International Affairs Office of the UAE prime minister, His Highness Sheikh Mohammed Bin Rashid Al Maktoum. Additionally, she holds responsibility within the Ministry of Foreign Affairs for the UAE’s bilateral relations with India, Pakistan, sub-Saharan African countries, and the Small Island Developing States. Al Hashimy has extensive experience in international affairs and started her career as commercial attaché and, subsequently, went on to become deputy chief of mission at the Embassy of the United Arab Emirates in Washington, DC. She completed her undergraduate studies at Tufts University, Massachusetts in 1999, where she earned Bachelor of Arts degrees in international relations and French. Al Hashimy also holds a master’s degree from Harvard University. 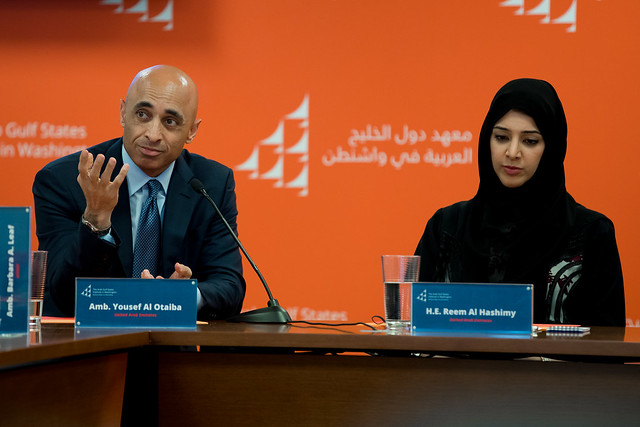