The South Asian subcontinent has for centuries been a region of vital importance to the Gulf due to converging economic, political, and strategic interests. The Gulf is now also home to a vast South Asian diaspora – estimated at over 10 million people, with at least eight million from India alone.

A new dynamism is developing in Gulf-South Asian relations as trade increases and both regions continue to grow in global importance and influence. Pakistan is a long-standing ally of many Gulf Arab states and India’s engagement with the Middle East, including the Gulf, is rapidly expanding.

A recent outbreak of hostilities between the two South Asian nuclear powers presents an immediate challenge for Gulf Arab states as India and Pakistan appear to be inching toward a broader armed conflict. What role can Gulf Arab countries play as friends of both? Where do the strategic interests of all sides converge and what impact might Gulf countries have in stabilizing South Asia? Are economic and energy interests in this relationship ultimately separable from security and stability concerns? How can these states harness the dynamic interplay of economic and social issues that animate this growing relationship?

AGSIW hosted a panel discussion examining the diplomatic, security, and economic issues shaping the growing relationship between the countries of the Gulf and the South Asian subcontinent. The panel followed a closed roundtable discussion on GCC-South Asia relations.

AGSIW’s Gulf Rising series analyzes the energized role of the Gulf Arab states in the international system, looking beyond GCC relations with the United States to examine ties with other key countries and regions. Additionally, it investigates motivations behind Gulf Arab states’ foreign policy choices and evaluates the implications for U.S. foreign policy toward the GCC states and the region. 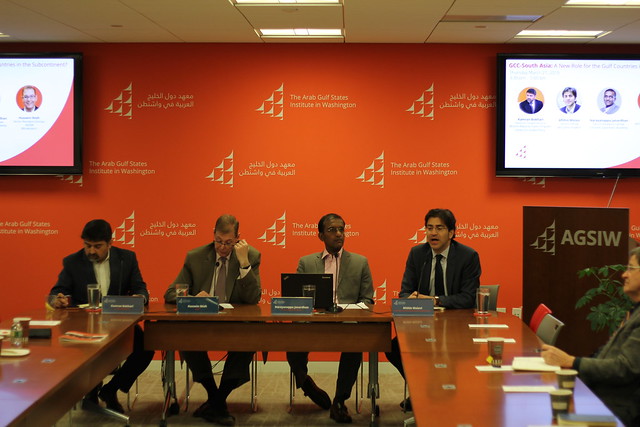