In his opening remarks, Mousavian discussed the negative effects of U.S. sanctions on the Iranian economy, including on trade and banking. He added that while the sanctions have been detrimental, the decline in the Iranian economy is primarily due to internal domestic issues such as corruption and mismanagement. Momani said the Iranian economy is suffering for multiple reasons including environmental challenges, unrest in minority communities, a decrease in foreign investment, and a shortage of hard currency. She mentioned that the billions of dollars spent on foreign interventions, as well as the major corruption within the government, have created additional tensions. Alfoneh highlighted Iran’s internal power struggles, notably the fight for control of the Islamic Republic, following the rule of Supreme Leader Ayatollah Ali Khamenei.

Ibish then shifted the discussion to Iran’s foreign policy. Mousavian argued that Iran never harbored hostility or animosity toward the Gulf Arab states, adding that the rift between the Gulf Arab states and Iran came as a result of U.S. President Donald J. Trump’s withdrawal from the Joint Comprehensive Plan of Action, or nuclear deal. Alfoneh disputed that, claiming that the Islamic Republic of Iran has long held animosity toward the House of Saud. He added that both the Islamic Revolutionary Guard Corps and the government of President Hassan Rouhani are eager to talk to Washington and eager to prevent each other from talking to Washington. Expanding on the internal dynamics within Iran, Alfoneh mentioned that the IRGC has been supportive of the public demonstrations against Rouhani in order to weaken his government’s position. Momani stated that Iran’s current engagement with Europe is necessary to salvage the Iranian economy; while smaller firms continue to do business with Iran, larger companies continue to pull out due to concerns over the investment environment.

Ibish also posed the question about the future of Iranian regional politics, particularly Iran’s relationship with the Gulf Arab states. Mousavian stated that there is a need to create regional security cooperation between the Gulf Arab states and Iran. He urged confidence building measures to begin a dialogue between Saudi Arabia, the United Arab Emirates, and Iran. Momani countered by stating that Iran’s heavy handedness is a sore point that has led to increasing sectarianism in the region. She mentioned the difficulty in partaking in a dialogue considering the ongoing conflicts in Syria, Iraq, and Yemen and Iran’s involvements in each of them.

The conversation was followed by a question and answer segment. 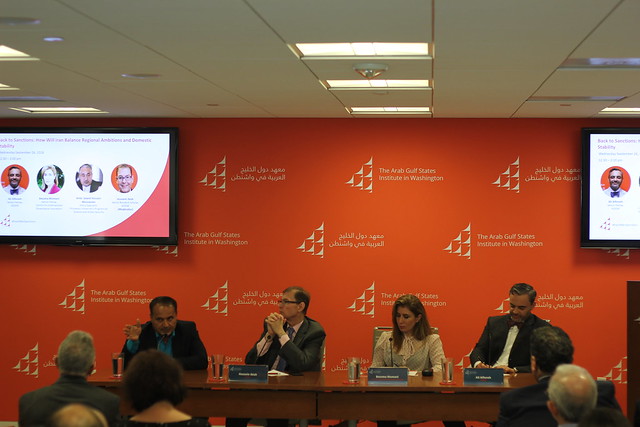 The U.S. decision to abandon the nuclear deal with Iran is bad news for crude oil importers, good news for exporters, and complicated news for those with more entwined relations with Tehran.

Iran: Neither Bread nor Freedom

On July 31, the Islamic Republic was once again shaken by rallies beginning in Gohardasht, in Alborz province, and Isfahan, the third largest city in Iran, as Iranians took to the streets to protest rising prices.

Maximal Pressure, Minimum Impact: How US-Iranian War of Words is Unlikely to be Matched with Action

Are the United States and Iran preparing to go to war? The prospect has certainly advanced considerably since Donald Trump became president and, particularly, when he withdrew from the Iran nuclear agreement.